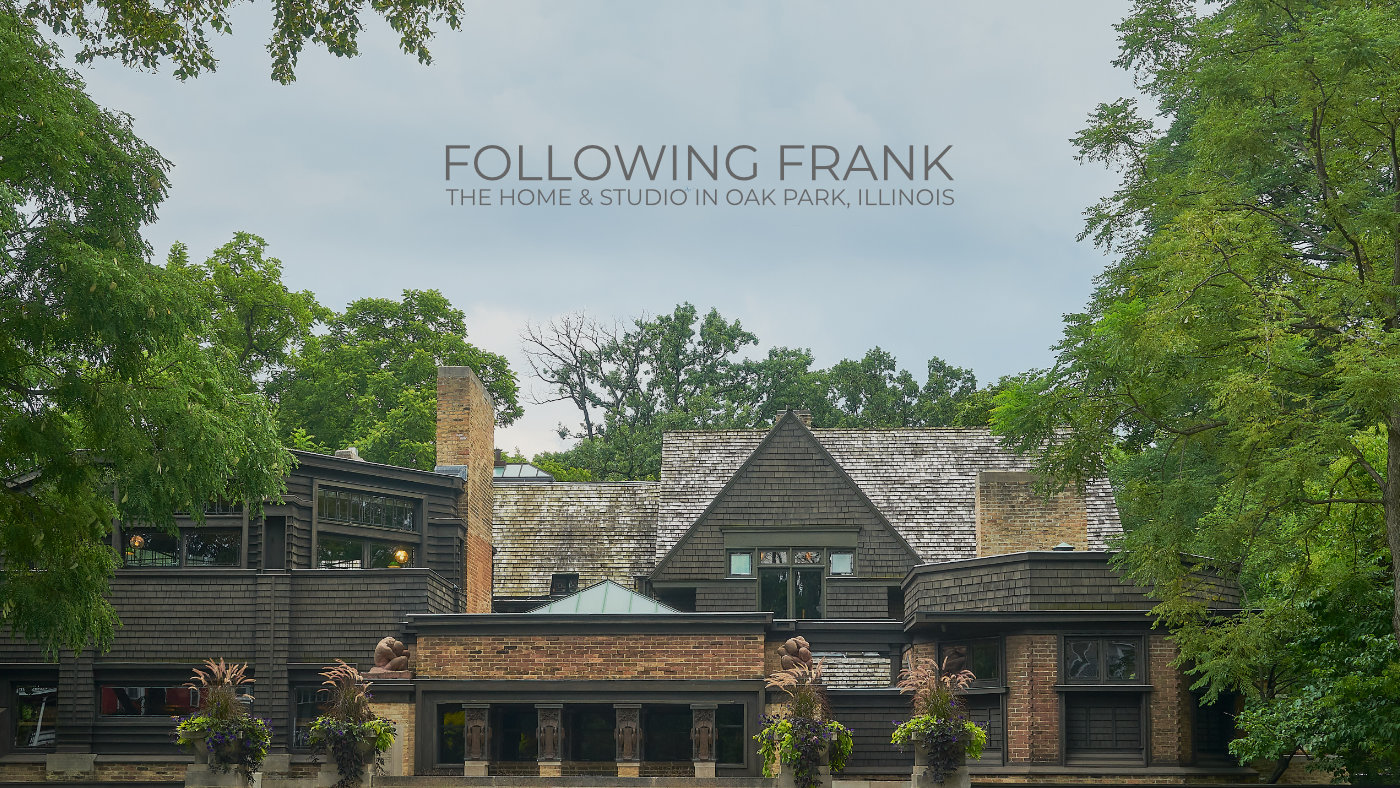 Like most Wright designs, I first saw it in a book. From that moment, I was captivated and inspired by Frank Lloyd Wright's Home and Studio in Oak Park, Illinois. Those feelings only intensified as I learned more about Wright and his relationship to this incomparable structure at the corner of Chicago and Forest.

I was young and somewhat naive when I first saw the images of the Studio, which was fortunate, as it allowed me the space to appreciate the design without the distraction of Wright’s personal intrigue. That was nearly thirty years ago and, looking back, those early impressions were probably most responsible for drawing me into the world of Frank Lloyd Wright. It launched an interest that would grow into a deep appreciation of both the man and his work.

I never thought I would see it with my own eyes. In many ways, it was my close relationship with another admirer of Wright’s work that re-ignited my passion. That relationship launched me back into the exploration of architecture and design. Within a year’s time, I would visit many of Wright’s signature works, as well as take a position at Fallingwater. It was the Home & Studio that had served as the gateway, though, and standing in front of the house on Forest Avenue would be awe-inspiring.

An Experiment in Design

I once read that the Home and Studio was like a life-sized playhouse for Wright. That idea was so novel that I could hardly understand what it meant. It wasn’t until I walked up to the house that I fully comprehended what it meant. Much like his portfolio of work in the surrounding neighborhood, Wright had used his home as a full-scale architectural experiment – a place where he could explore and refine his ideas for transforming the American home. The structure represents an amalgamation of concepts and styles, ranging from classical to “modern”, which he somehow successfully pulls together into a cohesive design.

A Sense of Arrival

Entering the house from the front door, you are again confronted with many traditional design elements. What differentiates the space from that of most of its contemporaries is the layout. It demonstrates Wright’s desire to fundamentally transform space design away from the traditional arrangement of smaller interconnected boxes into the open floor plan for which he would become known. It also demonstrates Wright’s ability to allow light into a space, while maintaining privacy and mitigating street noise, by locating the many side-by-side leaded glass windows higher on the walls. This stands in stark contrast to the next-door Victorian home with its tall, nearly knee-to-ceiling windows that require the inhabitant to decide between natural light and privacy. This is also an indication of his emphasis on the horizontal aspect of a structure and a hint at the later use of clerestory windows in his later designs.

The sleeping quarters feel much more traditional but still contain many of Wright’s distinctive queues. The most notable feature of the bedrooms is the large children’s room occupies the front portion of the upstairs. Rather than completely dividing the room with completely, the wall between boys’ and girls’ rooms does not extend fully to the high ceiling. I don’t recall the purported reason for this, but it is certainly inline with Wright’s desire to break the box. The other interesting feature in this part of the house is the bathroom window, which once again displays the Architect’s obsession with natural light. Rather than designing the window so that it looks out directly from the space, Wright instead boxed out a space in the wall and set the window on the side. This makes it impossible to see into the bathroom, while still allowing light to enter. It also creates additional (and interesting) dimension in the space. Despite the design being over 100 years old and containing period-correct fixtures, the space still feels remarkably modern and bright.

A Place of Play

The real feature of the second story, is the Children’s playroom. I tend to think that this space was as much for Wright as it was for his children, however. This is certainly one of his most recognizable interiors. The arched ceiling and art glass skylight are simply stunning. Despite the clearly classical design, the space still feels somewhat modern and, due to Wright’s masterful use of light, glows on a sunny day. It was certainly the place in the home that I would have preferred to linger.

One thing that is noticeably absent from both interior or exterior is an an overt Asian influence. As much of the Home and Studio was designed and constructed before Wright’s first visit to Japan in 1905, it lacks the Eastern aesthetic that is so readily apparent in his later works, Taliesin in particular. This house leans much more heavily on “Western” styles and details – rows of columns, dentil molding, classical sculpture, archways, etc. Still, it is combined in a way that is distinctively “Wright,” if not Asian. There are two notable exceptions, however. The mural in the children’s playroom, which depicts a scene from Arabian Nights and the cantilevered light fixtures in the same room. The latter would be massaged and reconfigured as a motif in many of Wright’s later works.

From the playroom, it was back downstairs to the kitchen. This was only my third experience in a Frank Lloyd Wright kitchen, the first two being at Fallingwater and Samara. Both of those had been designed long after this, though, and were certainly more modern. That said, this kitchen began my resistance to the conventional wisdom that Wright wasn’t a designer of functional kitchens. For a home design in the late 1800s, the kitchen is open, functional, and beautifully crafted. Unlike the kitchens of today, that serve as family gathering spaces, the emphasis was primarily on function. Still this space would be a wonderful place in which to prepare meals. It certainly lacks the abundant natural light of other rooms, but it is still comfortable and expertly crafted.

The next space was another well-known Wright design – and one I had wanted to see for many years. The dining room was a space that Wright often poured tremendous effort into designing, and his own was no exception. The space abounds in detail, from the high-back Stickley style dining chairs to the ornate light panel over the dining table. Even thought here is less natural light than in the playroom, in the middle of the day, there is still enough to cause the room to emanate a warm, soft glow. It is a beautiful space that almost feels too perfect to eat in. While beautiful, I would say that the room does not exactly feel comfortable. The combination of the low ceiling and tall chair backs made me wonder if Wright was using his concept of “compression and release” to direct people away from the table and back to work as quickly as possible.

I will conclude the description of my visit in part two, where I detail the most inspiring part of my journey through the space — exploring the Studio where Wright would build his early career.