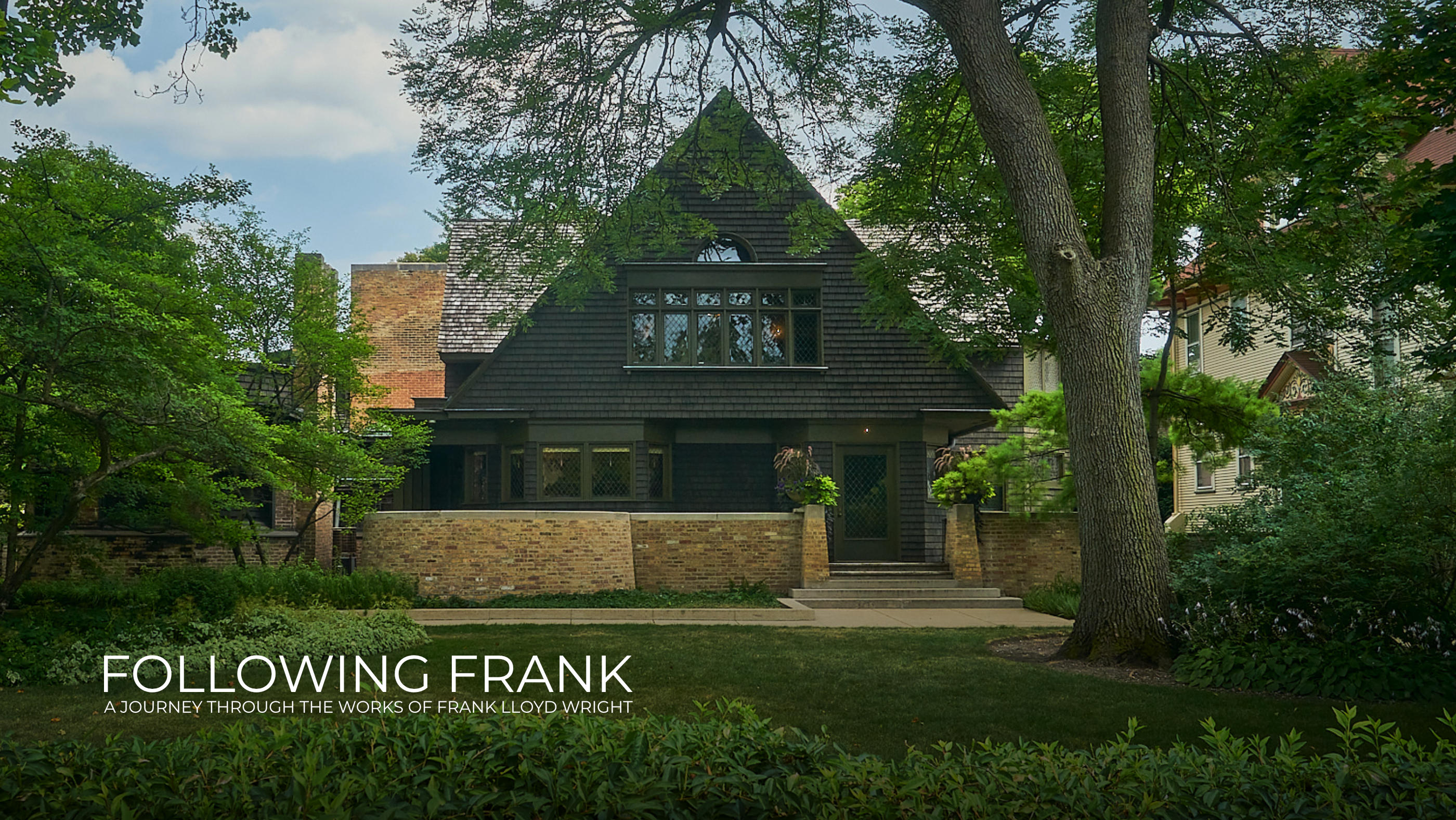 Any great admirer of Frank Lloyd Wright is obliged to visit Oak Park, Illinois. This is the place where Wright would develop his unique style, while continuing to do work of a more traditional nature. Probably nowhere else can you find a better cross-section of Frank Lloyd Wright designs than in this quentissential early 20th century American neighborhood. From the early "Bootleg" houses to gathering places like Unity Chapel, you can see Wright's evolution from the traditional to avant-garde. Still, even the early works bear certain characteristics that would define Wright's style through the mid twentieth century. Extreme attention to detail and an accentuation of the horizontal, even in his Victorian designs, are clearly evident.

Our ulimate goal in visiting Oak Park was Wright's Home and Studio. Our tour was scheduled for later in the morning, which provided an opprtunity to embark on the self-guided walking tour of Forest Ave. Looking back on it, nearly two years later, it seems like I was nervous with excitement. I had waited nearly 30 years to see the iconic houses that were only footsteps away. Adding to the excitement was the fact that I had embarked on this journey with a companion who was as fascinated by Wright and his works as I. It was the first great destination in our adventure.

From Chicago to Lake, by way of Forest…

Within a very short walk from the home and studio, nearly every type of Wright's design style, (or at least elements of each style) can be observed. The transition from Victorian, to Prairie, to even early hints at Organic and Usonian styles can be seen on Forest Avenue, between Chicago Avenue and Lake Street. It is an outdoor museum of Wright's early work, scattered along a lovely tree-lined residential street. Even today, it is easy to imagine the area as it was in the early 20th century. It's also easy to imagine how designs like the low-slung Arthur Heurtley and Frank Thomas houses might have seemed a nearly blasphemous departure from the brightly-colored and sharply-crowned Queen Anne and Victorian dollhouses that preceded them.

Perhaps the most divisive of the early Oak Park works in the reconstruction of the an 1895 design for Nathan G. Moore. Located just steps from the Home and Studio, this imposing Tudor mansion is a clear example of Wright’s desire to “fix” his self-perceived previous failures. Though still apparent in the 1922 redesign, the Tudor lines are radically transformed through the incorporation of low horizontal mass below the half-timber upper stories, which are themselves newly embellished with ornately crafted elements. The changes make the house more reminiscent of a Gothic cathedral than the original Tudor Revival. For Wright purest–especially those more fond of his Usonian designs–the house is often, at best, “unsatisfying.” Still, all the elements of a "Wright Design" exist…and it sits almost squarely in the middle of Wright’s architectural career, during a time when Wright was seeking to remake his career after scandal and tragedy.

The Edward R. Hills house struck me instantly as a Wright design. Its dual-pitched roof and broad square entry columns provide a pagoda-like appearance that seems in line with the architect’s undeniable (yet flatly denied) aesthetic. The striated arrangement of the roof shakes only add to the Asian feel, giving it the appearance of tiles. It stands in stark contrast to the Nathan G. Moore house, which sits just nextdoor, across a large manicured yard. The Moore House is dramatic and elaborate, while the Hills house is simple and subtly decorated. It is certainly "Prairie" in appearance. Though constructed of much different materials, the Hills house shares much more in common with it’s across-street neighbor, the Heurtley house. It has tremendous visual mass, and the gray stucco only helps by giving it the appearance of concrete. As much as the Nathan Moore house seems like a Gothic cathedral, the Hills house feels like an austere eastern temple.

If you know anything about Wright’s Forest Avenue commissions, you almost certainly recognize the Arthur B Heurtley house. I can only imagine what the neighbors must have thought of this design when it appeared in 1902. There are but hints of classical architecture in the design. It’s squat stature and thin Roman brick construction emphasize the horizontal and lend a sense of great mass. The house also seems to glow in the late afternoon sun, possibly due to quartz or some other reflective element in the brick. Given Wright’s tendency to play with light, I wondered if this was intentional. The Heurtley House is one of my favorite designs on Forest, and I found myself walking past it multiple times, stopping to appreciate the house and the beautiful lot that it inhabits. Much like the Hills house, it felt more like a temple than a house. This was a sensation I would experience at several of Wright's designs, however.

The Peter A. Beachy house is another example of a Wright renovation. The house is instantly recognizable with the yellow stucco of the upper level standing in stark contrast to the red brick. This color contrast, in combination with the extreme symmetry of the structure, sets it apart from the other designs on Forest. Despite the heft of the design, the house feels less serious...almost playful. Even though I like the house, it is far from a favorite. I appreciate it for what it offers, though, and it certainly lends to the overall sense of experimentation that the Oak Park area provides. In 2019, while I was working at Fallingwater, the grandson of Peter Beachy introduced himself to me at the end of a house tour. He was kind enough to share a few anecdotes about his grandfather's house before continuing on his way. As much as I love seeing the houses, I may have an even greater appreciation for these personal connections to Wright and his work.

Located on Elizabeth Court, just steps off of Forest Ave, the Laura Gale House could be easily overlooked by anyone without a helpful tip from a a local Frank Lloyd Wright aficionado. It would be a shame to miss this house, though, as it offers early hints at Wright’s most famous design, Fallingwater. Constructed 27 years earlier (1909), the Gale house features the an early example of the cantilevered designs which would become his calling card, spanning his Prairie, Organic, and Usonian creations. Though not as dramatic as Fallingwater, this house certainly has the spirit of the Kaufmann house, right down to the stucco exterior and Cherokee Red accents. Unfortunately, you can't see much of the house from the street, and it is shoehorned into a small lot between two other houses. Still, it's intriguing to think that the ideas that would be incorporated into one of the most famous houses in the world began with a relatively modest home on a side street in Oak Park.

The Frank W. Thomas house is a prime example of how Wright was willing to turn convention on its head. He is well-known for circuitous and/or dramatic house entrances, but maybe none more so than here. The path to the street door feels like you are entering an ancient crypt or the back door of a castle. It is cave-like and, because the door is offset in the entry, gives little indication that you are actually on the right route to enter the house. Even after looking at pictures of this house for over 30 years, I have to say that none of them every truly conveyed the sense of mystery that this house exhibits. It's actually difficult to discern much about the house from street level at all, as much of the living quarters is located well above head and obscured by the facade. I can see how some might find this house a bit offputting, especially if you are looking for something with a warmer welcome. However, I was thoroughly seduced by the mystery.

I don't think I have ever been so enamored with a neighborhood as I was with Oak Park. We spent three full days in Chicago. We visited other Wright sites in other parts of the city. Each day, though, we found reason to return to the streets around the Home and Studio. We were blessed with the most perfect summer weather imaginable, which allowed us to either walk or bike from our accommodations and to experience the area almost like locals. It was easy for me to imagine living there. I would find a home and work location that would place Forest Avenue in the path of my daily commute. I would stop each day and gaze upon the Home and Studio, or the Heurtley house, or the Thomas house. I would make a life in a place that I had never before set foot in. Those thoughts still fill my mind. I look at my photographs of the experience and I am overwhelmed with the wonderful memories of those days in Chicago. I cannot wait to return.

There will be more about Oak Park and, in particular, our experience at the Home and Studio. That's simply too much to share in this post. Nonetheless, experiencing its neighbors was the perfect lead-up to the tour of Wright's Chicago home…and the result of truly inspired planning by my companion. I can't wait to share that experience with you, and to relive it in my own mind.