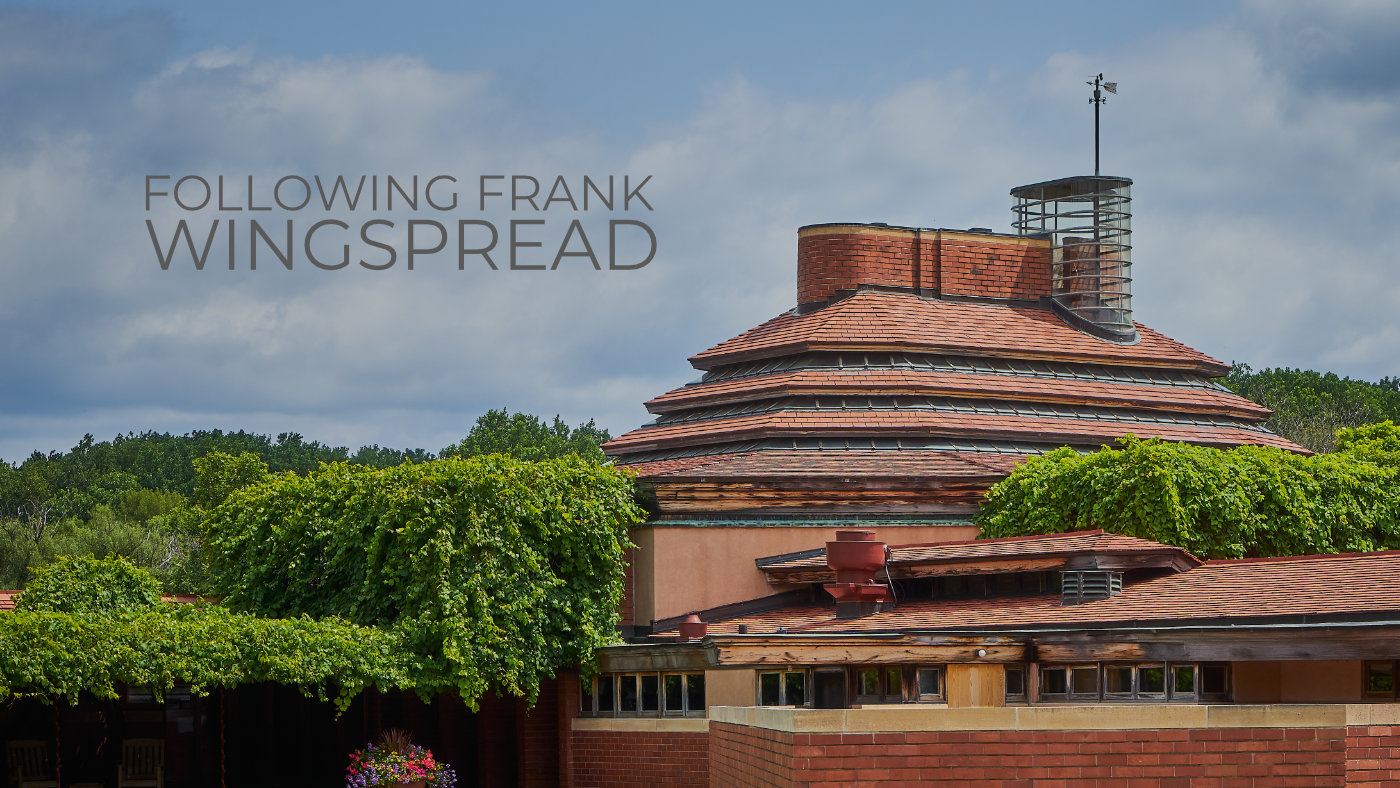 My trip through the Midwest, exploring the works of Frank Lloyd Wright, reinvigorated my interest in his work. Eight months after returning from the adventure, I was working at Fallingwater and digging into Wright’s portfolio and design philosophy. It’s a nearly endless task, studying the career of an architect who was active for nearly seventy years and designed over one thousand buildings, of which about 600 were completed. That’s a phenomenal amount of work for any architect. When you consider that nearly half of that work ( and much of his best-known work )came after Fallingwater and SC Johnson, when he was between 67 and 90 years old. Even so, much of Wright’s design philosophy was apparently developed in his very early youth…and possibly no more clearly expressed in his design for the home of third-generation SC Johnson leader H.F. Johnson, Jr.

The H.F. Johnson, Jr. house, named Wingspread, is often referred to as Wright’s largest Prairie home. When viewed from the top, the house resembles a pinwheel, the various “blades” of the house radiating out from the corners in all four directions. After reading the introduction to the book, The Architecture of Frank Lloyd Wright by William Storrer, it became obvious that Wright had developed a loose system on architectural design that may well have grown out of the Froebel Block toys that were gifted to him by his mother. These blocks, designed to help children to develop a deep understanding of geometric forms, were referenced by Wright on several occasions. An exploration of his work reveals how his architectural design may be rooted in a fundamental understanding and appreciation for basic geometry that grew out of his experience with the childhood learning tools, developed in the early 19th century.

From the ground, Wingspread is impressive. When you arrive from the main entrance, the frontmost two arms of the house fill most of your view, the great core of the house rising from the center. I is impressive in its scale but, except for that the interesting roofline of the the central part of the house, there really isn’t much detail to be seen. Ivy covers much of the house and obscures the view of most of the brick and wood architecture on the left side, while the right side is composed of a relatively simple brick wall. The visual interest is certainly the terraced roof of the central part of the house and the crow’s nest that rises from it. The same red brick that was used for the SC Johnson Administration Building forms most of Wingspread, which shares several design and material similarities with its industrial sibling. Even though it is a Prairie house, it is difficult to think of it in the same way as something like the Emil Bach house.

After taking in the house and garden, we made our way to the left an up the original driveway. Here, the architectural detail of the house comes into better view. The exterior woodwork, largely hidden by the ivy on the other side of the house, is revealed to be unfinished cypress, aged to a dull grey by the sun and weather. It is a perfect complement to the brick, stone, and concrete that comprise the rest of the house. It is a subtle accent that, in combination with small patches of stucco, provides an organic element, softening the formal appearance of the house and making it feel less cold and austere. Looking down the the wing, you can see the primary change to the structure, where the previously open carports have been converted into offices for administration. It is an elegant transformation that does little to detract from the design.

Up farther, the main entrance of the house is visible, well below the terraced roof,. Beyond that, the next wing of the house extends and disappears from view, behind the trees and plantings in the middle of the roundabout driveway. For such a large house, the entrance is relatively humble. A simple (and low) flat awning and raised step are all that indicate it as the main way into the house. Immediately to the left of the entry doors, great vertical windows hint at the scale of the interior space. These are only visible as you move past the entry doors, however, as they are deeply recessed into great brick columns, capped by a cantilevered cypress trellis. Overall, the architecture is much more interesting on this side of the house, as Wright combines various shapes, materials, and architectural details. Always present in your view, though, is that magnificent roofline.

Wright uses his old tricks of compression and release to great effect in Wingspread. After entering the house, you are squeezed into a small foyer, then released into the towering living space. Even on the inside, it is difficult to imagine this as a home. The living room, dining area, and study occupy the open plan lower level surrounding a massive central chimney. On the side that greets you, a massive swing-away cauldron resides in the man-height fireplace. For the living room, Wright sinks the area down around another large fireplace, surrounded by seating. This recalls the inglenook that was so common in Wright’s early designs, but also previews the trend of the sunken living room, common in many Mid-Century Modern designs. This is roughly mirrored on the other side of the chimney. The dining area is immediately to the right, as you enter the room, and features a retractable dining table that could be set and prepared in the kitchen, prior to being delivered through the wall into the dining room.

The the central chimney pulls you gaze up to the real feature of the space – the ceiling. From inside, you can see the dozens of small trapezoidal windows that sit between each layer of the roof, forming three rings of light, radiating out from the chimney. It’s easy to see why this roof was infamous for its leaks. There are so many seams for water to enter through. It was certainly an ambitious design, especially for the technology of the 1930s. Everything is ambitious about Wingspread, though. It is a house built on an industrial scale, and with premium materials and craftsmanship. Even more than in Wright’s more modest designs, it is remarkable the amount of detail that exists in this massive building. There are small items to be discovered around almost every corner and on every surface. The finishes are refined and carefully applied. It almost feels like Wright intended for Wingspread to be a showcase of his newest ideas for luxury design.

As you move through the rest of the house, it never ceases to feel formal. The bedroom wings are beautifully designed and crafted, yet lack much of the warmth of the smaller Prairie homes. Some of this could be due to the lack of personal items in the house. It simply doesn’t feel “lived in.” After seeing the Emil Bach, house, Wingspread seemed dark and barren in comparison. It is spectacular, but it is also fitting that the house now serves as a conference center. It feels more like a meeting space than a home. A family could easily spend days in Wingspread without seeing one another. Children might love it as a giant playground and, apparently, the children of H.F. Johnson did love it for that reason. There are places to hide and to escape. There are places to play, such as the crow’s nest. Ultimately, though, it just doesn’t feel like a place for a family. After only a short time, the house was abandoned by the family and put to use in a different capacity.

Despite any critiques I have of Wingspread, it is still an amazing place. I would have loved to have seen it as a home, decorated in the fashion that Wright intended. After spending so much time at Fallingwater, I think I am spoiled by the efforts that are taken to make it feel like the family still visits the house. It feels warm and personal…It has its own personality that, truthfully, is lacking from many public Wright sites. That said, the effort, not to mention the expense, required to maintain a structure like Wingspread must be extraordinary. I am grateful that it is so well maintained and that it is open to the public. I am also grateful that the children of H.F. Johnson were able to share the experience of living in the house as children. The stories of the people Wright built homes for are essential to understanding the buildings themselves, as Wright designed each home specifically for the client. It is a concept that seems so foreign in an era when million dollar homes are built well before an owner even enters the picture.