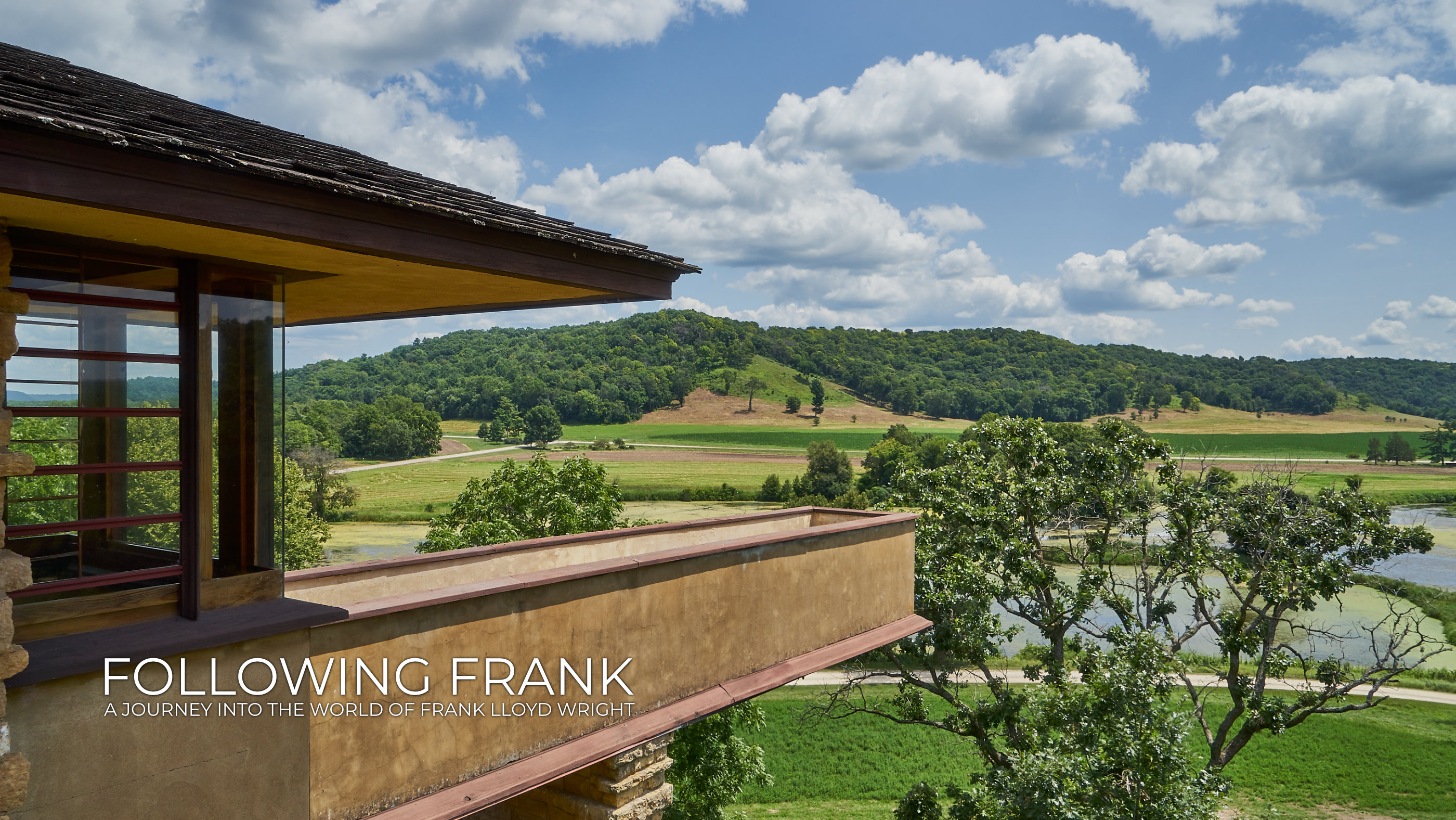 It was a journey I had hoped to take for many years – a spiritual pilgrimage of sorts. Though it was hardly at the end of a road strewn with hazards and obstacles, it did seem like a somewhat unattainable dream to travel in the footsteps of a man whose work I held in great regard for the majority of my life. In the end, it would be a deeply moving experience and would make me question many of my long-held notions about art, design, work, and life.

Ironically, the first step of the journey began many years ago with an idea shared between mother and son. My mother first visited Frank Lloyd Wright’s Fallingwater while attending college at nearby West Virginia University in the early 1970s. She was clearly inspired by the place and shared it with me when she saw my budding interest in modern architecture and design. How could anyone but the most cynical not be inspired by Fallingwater, though? Quixotically (and defiantly) placed atop the waterfall by which it was inspired, with soaring decks reaching out into the forested landscape and over the waters of Bear Run, it does seem, as was intended by its designer, to grow out of the site. 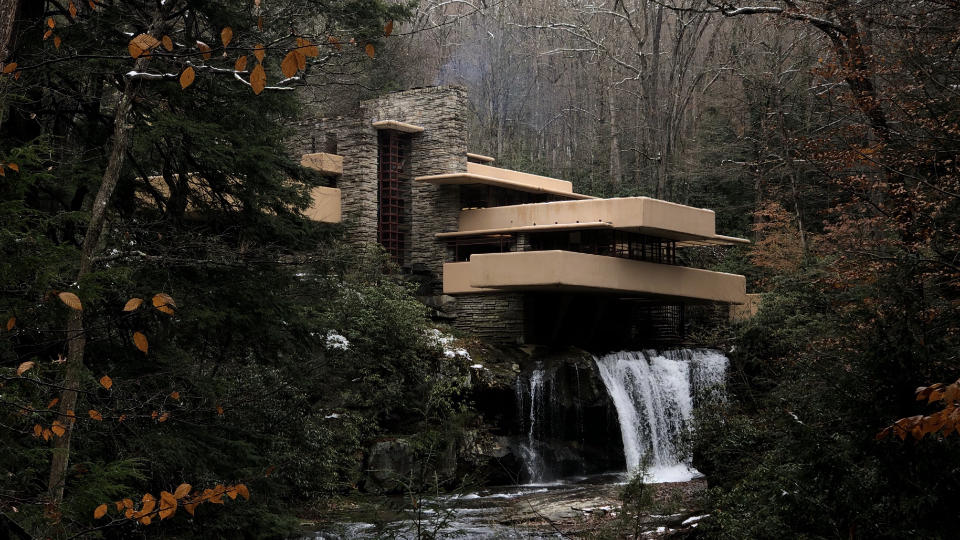 It would be many years before I would visit Fallingwater again. I returned in 2016, this time with my partner, Emily, who also holds Frank Lloyd Wright in high regard. It was the first time I saw the site as it was intended, floating gracefully over the waterfall with all of its structural secrets now hidden from view. It was a nearly religious experience, much the same as was my first visit. A year later, I would be living a mere thirty minutes from Fallingwater, in a Mid-Century home clearly inspired by the works of Frank Lloyd Wright…and partially constructed by one of the same stone masons who assisted in the construction of Kentuck Knob. It was nearly twenty years ago when I first saw Fallingwater with my own eyes…and hardly under what most would consider ideal conditions. My trip to the "summer retreat" of the Kaufman family came during the effort to repair the sagging main deck of the structure. Greeted by the great room of the house, devoid of the iconic built-in furnishings and waxed stone floor, the long concrete reinforced beams reached out in front of me, framing the massive stone foundation and stream below. For many, it may have been an underwhelming, perhaps even disappointing sight. For me, though, it was an amazing glimpse behind the curtain – something few would ever have an opportunity to see, or would even care to see.

My new home, in an area of southwestern Pennsylvania referred to as the Laurel Highlands, sits at the base of the Chestnut Ridge – the last ridge on the western side of the Allegheny mountains in Pennsylvania. In addition to Fallingwater, it is also located within a short drive of both Kentuck Knob and Polymath Park, the latter of which is home to two Frank Loyd Wright houses, as well as two houses designed by his former students. It is a beautiful place, rich in history and natural beauty, and clearly an ideal location for the works of a man so obsessed with nature. Still, there is much more to experience in the world of Frank Lloyd Wright.

Originally conceived as a short weekend trip to Buffalo, New York, for a first-time visit to the Darwin D. Martin house and Graycliff Estate, an unexpected change to our schedule left us free to aspire to a greater undertaking. Taliesin and the rolling hills of Wisconsin would now be our final destination. Along the way, we would take in as much of Wright's work as possible, given our week-long availability and the tour schedules of the various sites. In less than a month, the itinerary was set, the course plotted, and tours booked. We would soon be setting off on our way to our ultimate destination of Spring Green, Wisconsin, with stops along the way in Chicago, Kankakee, Milwakee, and Madison. The final piece of the route came together only a few days before departure, as we opted for a trip to Samara in West Lafayette, Indiana – one of Frank Loyd Wright's final and most complete residential commissions – as its availability to the public was far more restrictive than another option along our route, the Westcott House.

A relatively new discovery for me, Samara is a beautiful example of one of Wright's more practical residential structures. Located at the edge of a wooded lot in a quiet residential section of West Lafayette, Indiana, the house is largely obscured from the casual passerby. As with many of Wright's designs, the entry is not entirely obvious. From one side, the driveway is nondescript, other than a sculptural gate that largely blends into the greenery. From the other side, Wright took pains to shield it from the main road, which also makes it difficult to find the front door, tucked under the deep overhang of the eve. Perhaps the feature that most attracted me to this design is the striking patinated copper fascia edging the roofline of the carport and main entry. It is reminiscent of details from some of Wright's Mayan Revival designs in California and lends a bit of drama to the otherwise subdued Usonian exterior. 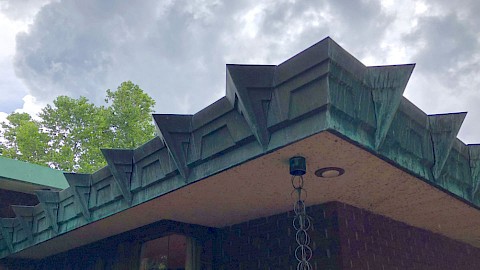 On the interior, many of the details of the house were added after Frank Lloyd Wright's death in 1959, but true to his design specifications. You can see many of the architectural and design refinements which were developed over Wright's long career. The house is more precise and more "futuristic" than many of Wright's earlier designs, though still incorporates nature as an integral part of the design through the use of large plate glass windows that look out over the previously mentioned wooded lot. The inteior is adorned with custom accents and furnishings, designed by Wright and crafted by multiple highly-skilled local artisans over the past 60 years. It is a beautiful structure and site with a wonderful relatable story. I hope to be able to visit this house again as they continue to make restorations and add Wright's finishing touches.

From Indiana, it was on to Chicago, with a brief stop on the way out of West Lafayette to take a quick look at a small bank designed by Wright's mentor, Louis Sullivan. While many of the details of the facade were still in place, the overall design has been compromised by questionable updates and additions. Still, if you are in the area, it is worth the short drive from Samara to see the ornate detail work.

In Part 2, I will begin to share the details of my stay in Oak Park, where Wright began to stake out his claim as one of the world's greatest architects.